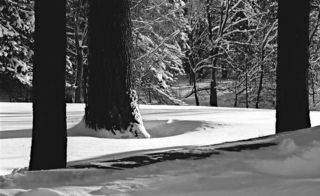 Snow Bowls in the Country

The strong visual sense I likely inherited from my painter grandmother infuses the visual nature of my writing and my interest in landscape photography. When I first moved to Minnesota, having not seen very many of them, I began avidly photographing winter scenes and snowstorms. It became a spiritual endeavor during a very difficult period. I'm presently completing, through the eyes of someone who grew up in a semi-tropical climate, a nature memoir about Northern winters and the effect of climate on those suffering from depression. This book is about how we can all, especially in the face of global warming, re-see the winter season.

What attracts me to winter photography is, in part, the synchronicity between the photograph itself and what it portrays. A still photograph freezes time, and black and white photography freezes image more than color does, in the starkness inherent in the interplay of light and dark. In the winter of the Upper Midwest, under the weight of cold and ice and snow, time is also frozen, motion and image are frozen, white and dark tones dominate. There's a perfection in the stillness of a black-and-white photograph that's duplicated in the stillness of winter.

Blizzard Day in the Country

Please Note: All images and text on this website © Linda Lightsey Rice. Images and content may not be used without permission.